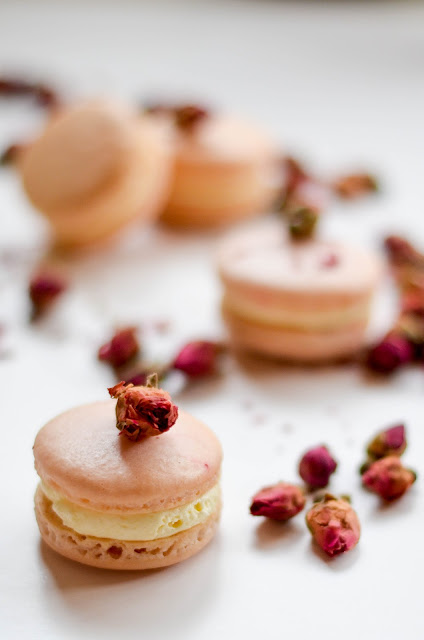 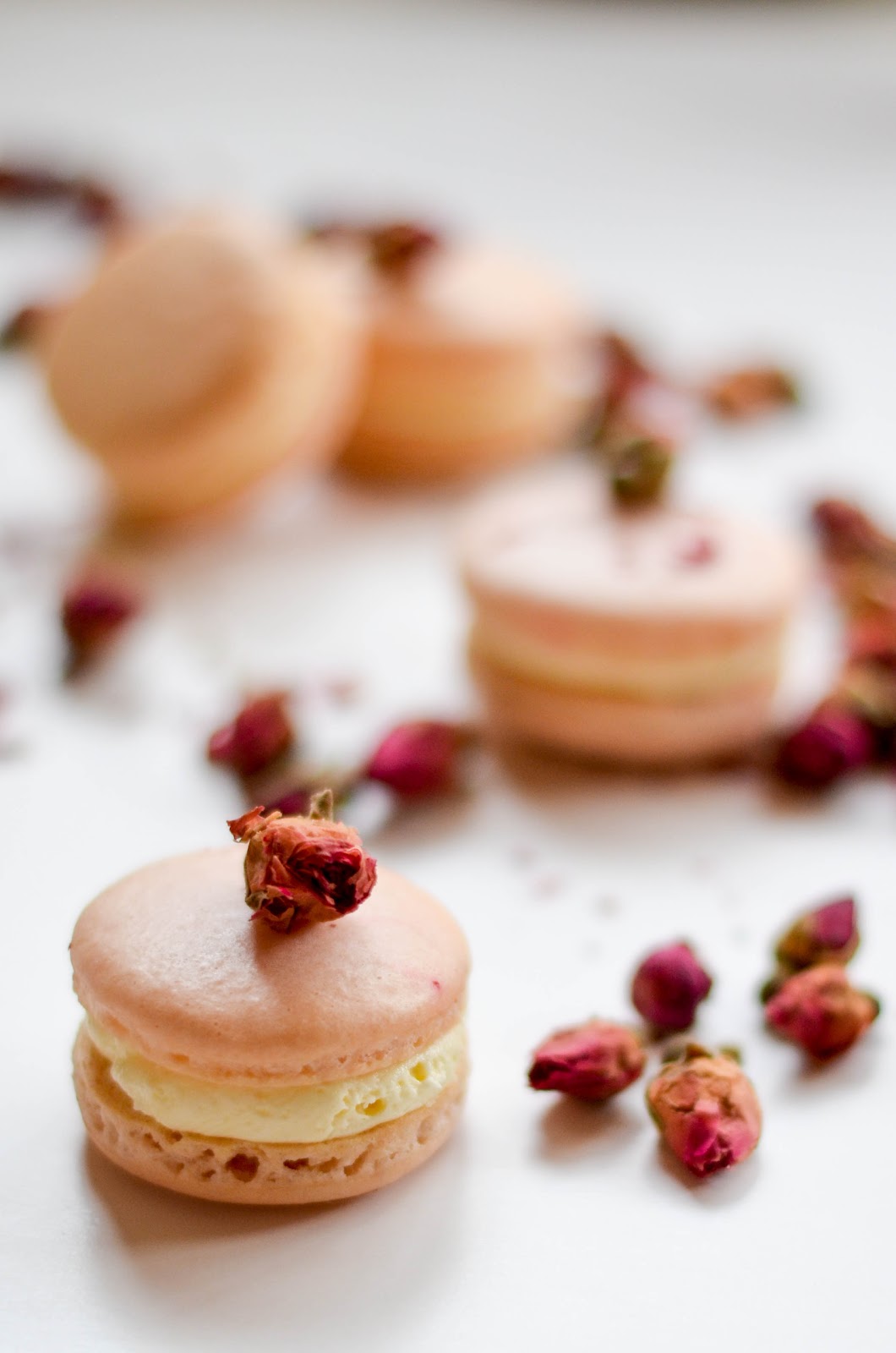 I think there are more flavors in macrons than flavors of ice cream. Think about it. Candy cane macarons, chilli macarons; can you believe there is one that has the flavor of hamburger. If you know what Vegemite is then yes, there is a macaron for that too 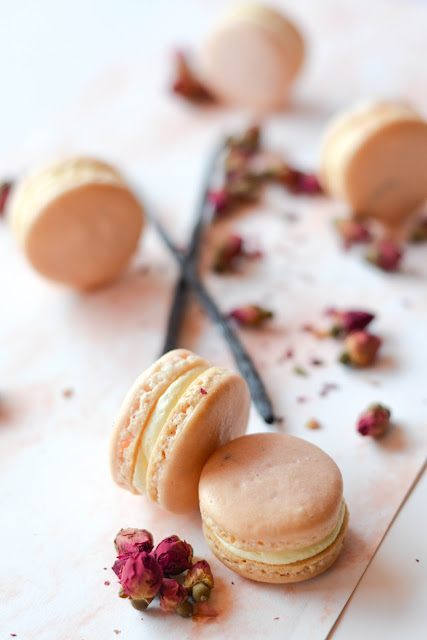 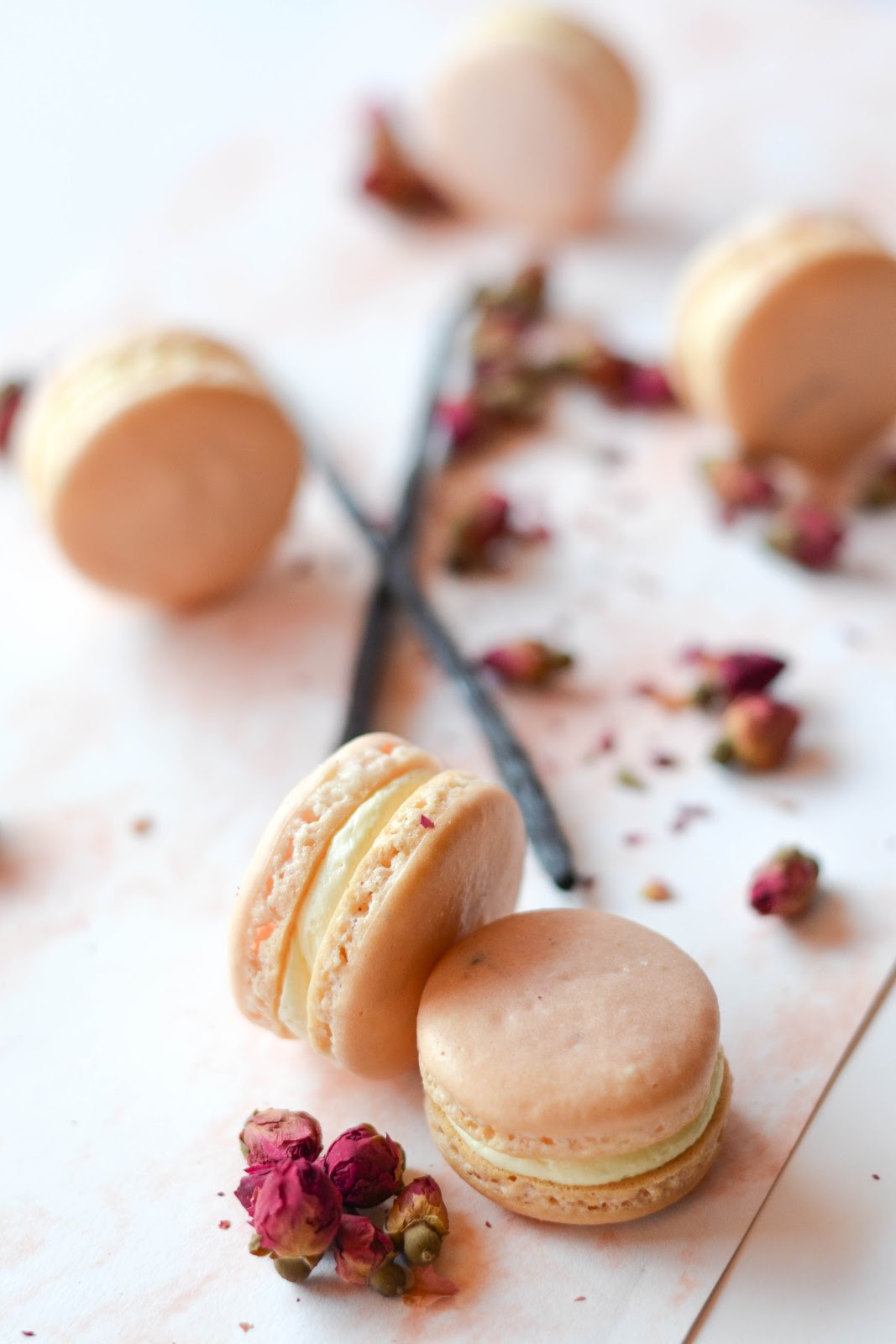 One can only think how they got the taste into the filling.
While I am not that adventurous, I am willing to try pairs of herbs or flower with familiar flavours. Rose is not a new herb in the culinary arts, but we have moved on from using it only in Turkish delight. It is not so much a flavour but the scent is very powerful. I used to hate it as a kid but like dark chocolate, it comes with maturity. Often I would see my mother brew herself a cup of tea, which consisted of many different dried flowers and a vanilla pod, producing a pleasant aroma.
This is the inspiration behind this latest macaron creation, but I really want to evoke the calming mellowing sensations of the tea. Rose tea is ground to fine power and added to the shells, while the vanilla Swiss butter cream filling has three types of vanilla added to it. 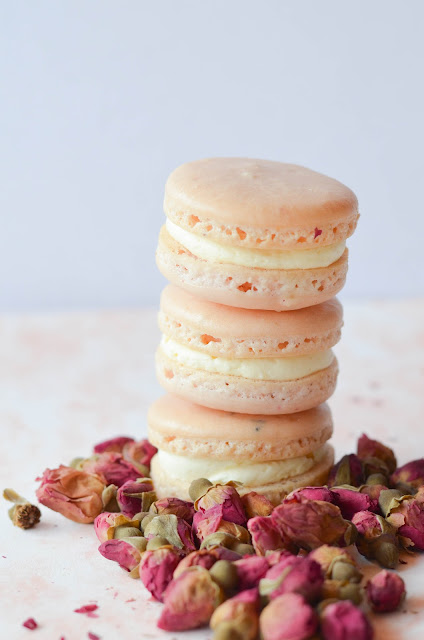 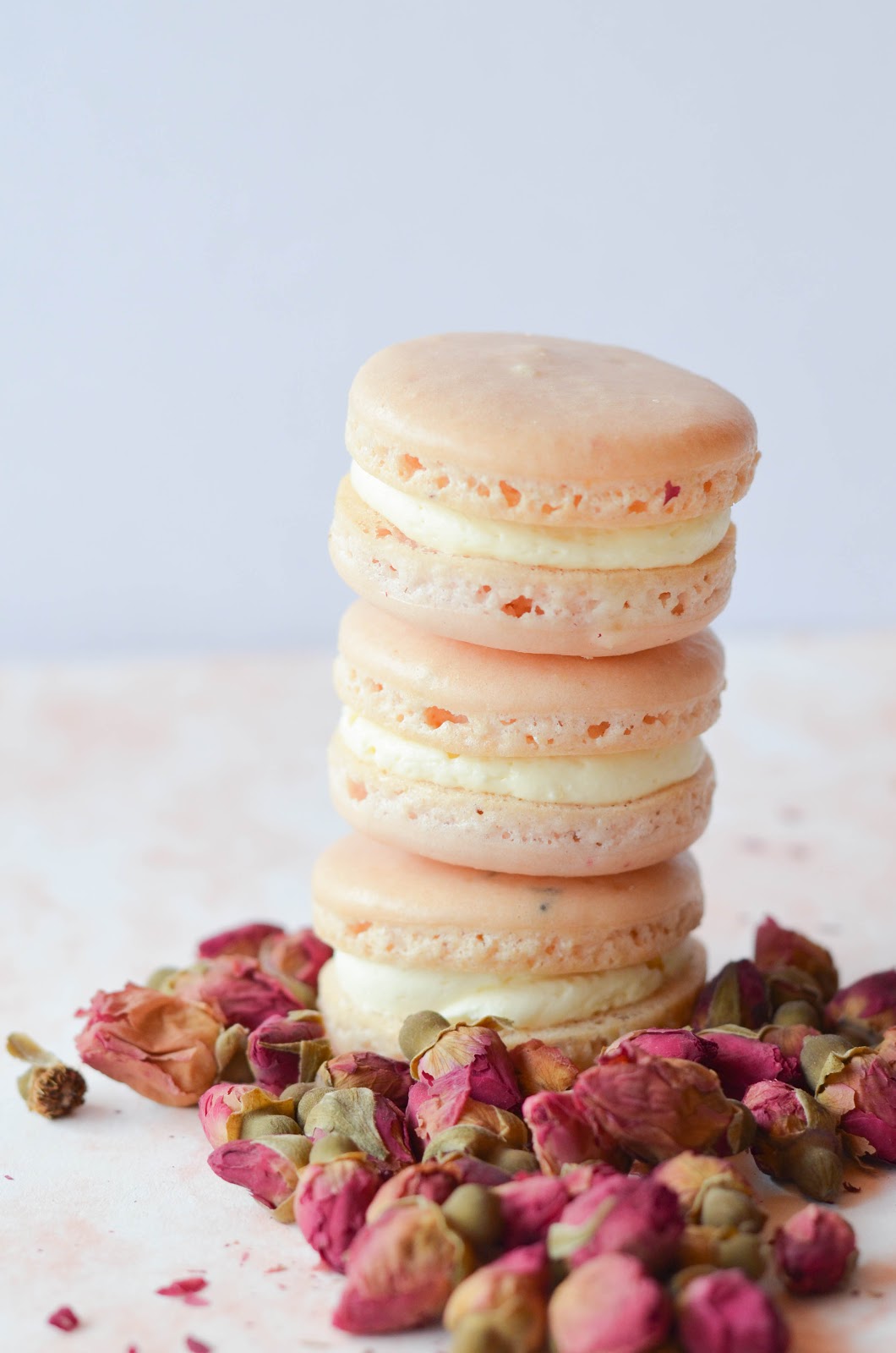 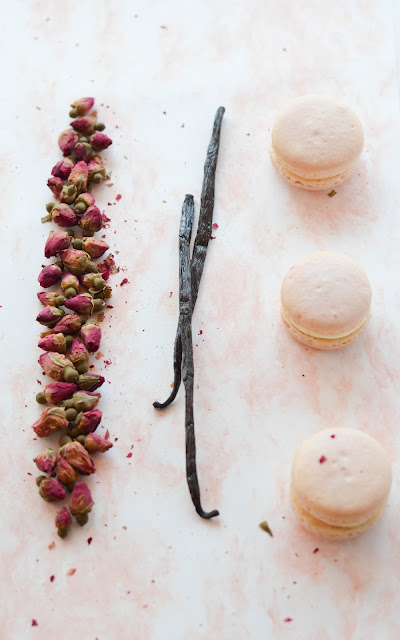 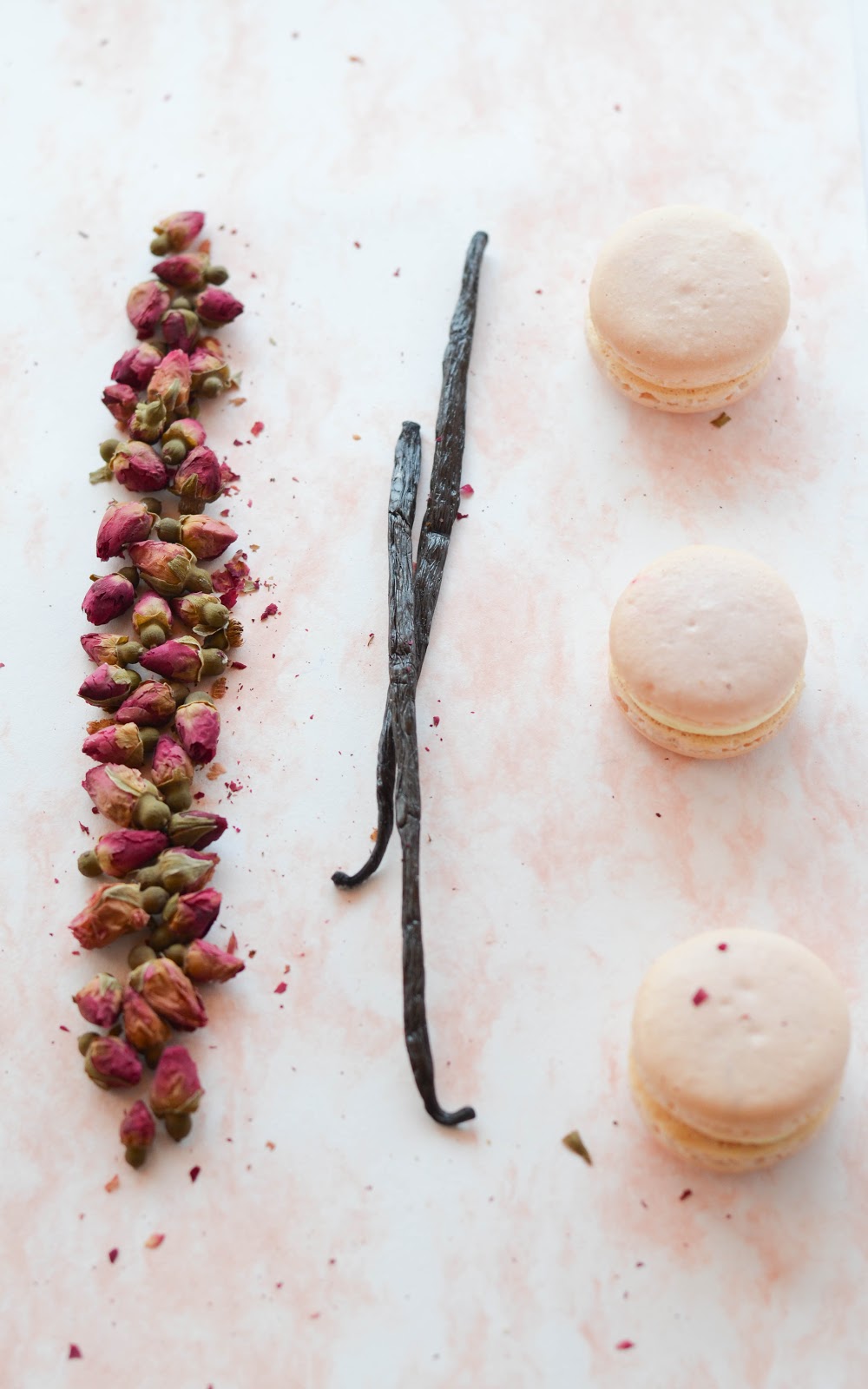 90 gr egg whites (use eggs whites that have been preferably left 3-5 days in the fridge)
30 gr granulated sugar
200 gr powdered sugar
5g dried rosebuds
105 gr almonds (slivered, blanched, sliced, whatever you like)
Prepare the macarons:In a stand mixer fitted with the whisk attachment, whip the egg whites to a foam, (think bubble bath foam) gradually add the sugar until you obtain a glossy meringue (think shaving cream).
Do not overbeat your meringue or it will be too dry.
Place the powdered sugar, rose buds and almonds in a food processor and give them a good pulse until the nuts are finely ground.
Add them to the meringue, give it a quick fold to break some of the air and then fold the mass carefully until you obtain a batter that falls back on itself after counting to 10.
Give quick strokes at first to break the mass and slow down. The whole process should not take more than 50 strokes. Test a small amount on a plate: if the tops flattens on its own you are good to go. If there is a small beak, give the batter a couple of turns.Fill a pastry bag fitted with a plain tip (Ateco #807 or #809) with the batter and pipe small rounds (1.5 inches in diameter) onto parchment paper or silicone mats lined baking sheets. Let the macarons sit out for 30 minutes to an hour to harden their shells a bit. In the meantime, preheat the oven to 280F. When ready, bake for 15 to 20 minutes, depending on their size. Let cool. If you have trouble removing the shells, pour a couple of drops of water under the parchment paper while the sheet is still a bit warm and the macarons will lift up more easily do to the moisture.
Don’t let them sit there in it too long or they will become soggy. Once baked and if you are not using them right away, store them in an airtight container out of the fridge for a couple of days or in the freezer.
Very vanilla Butter creamAdapted from brave tart
140g egg whites
140g Vanilla sugar
1/2tsp salt
1tsp vanilla essence
1/2 vanilla pod, scraped
1 ground dried vanilla pod (de-seeded)
458g butter
Proceed as normal with the recipe from Brave tart, but in addition add the vanilla add the addition vanilla pod, essence and ground vanilla pod. Beat until light and fluffy again.
Assembly
Sandwich one shell with a teaspoon of butter cream. 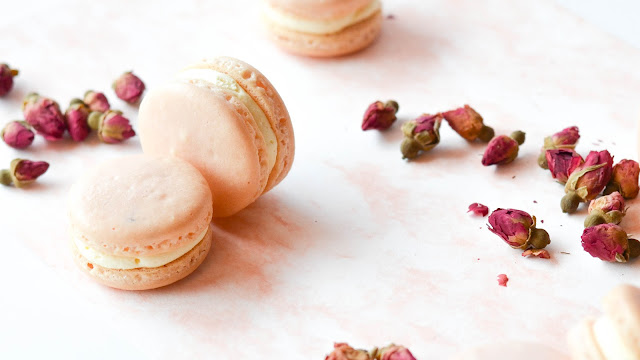 'Rose and vanilla macarons: the power of flavours' have 10 comments