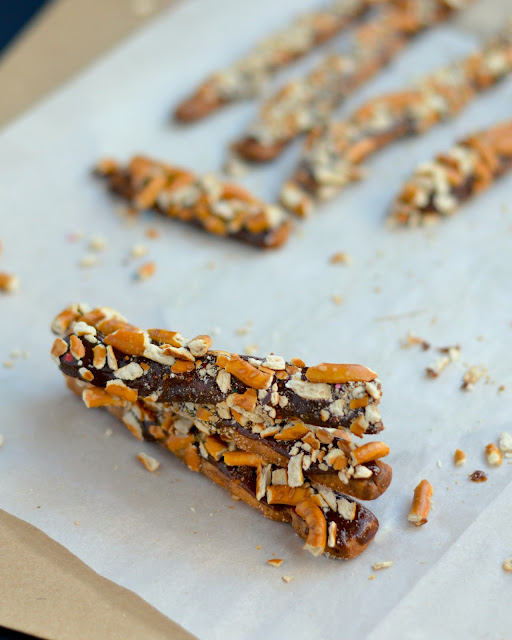 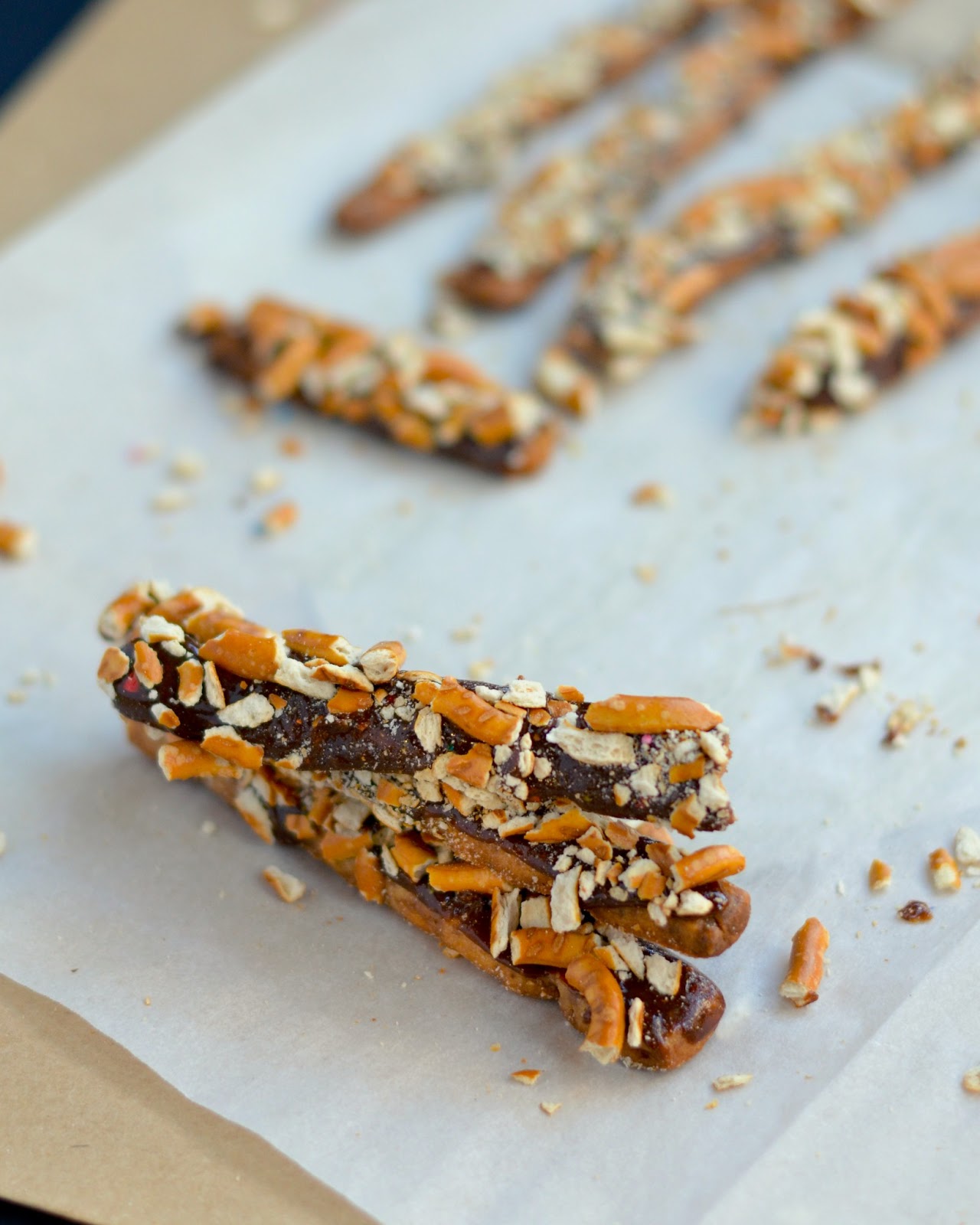 For you readers in the Northern hemisphere, you are probably in the middle of you winter wonderland. Totally jealous right now, not just because I have a higher than normal body temperature, but mother nature’s kids are playing the thermostat . Right now in Australia, we are in summer. Not just any summer, I think it has to be the most sporadic summer on record. 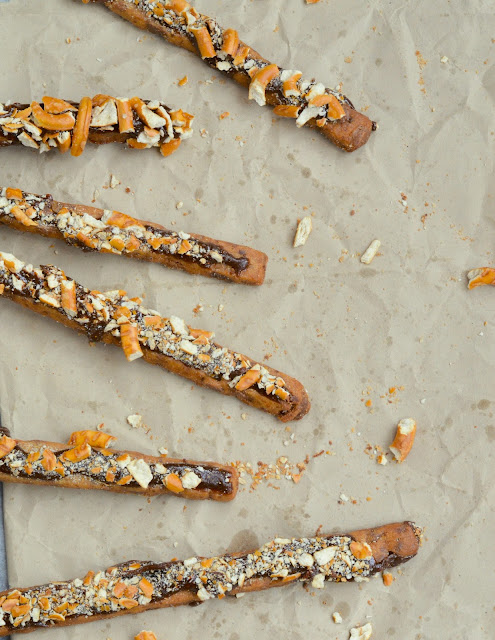 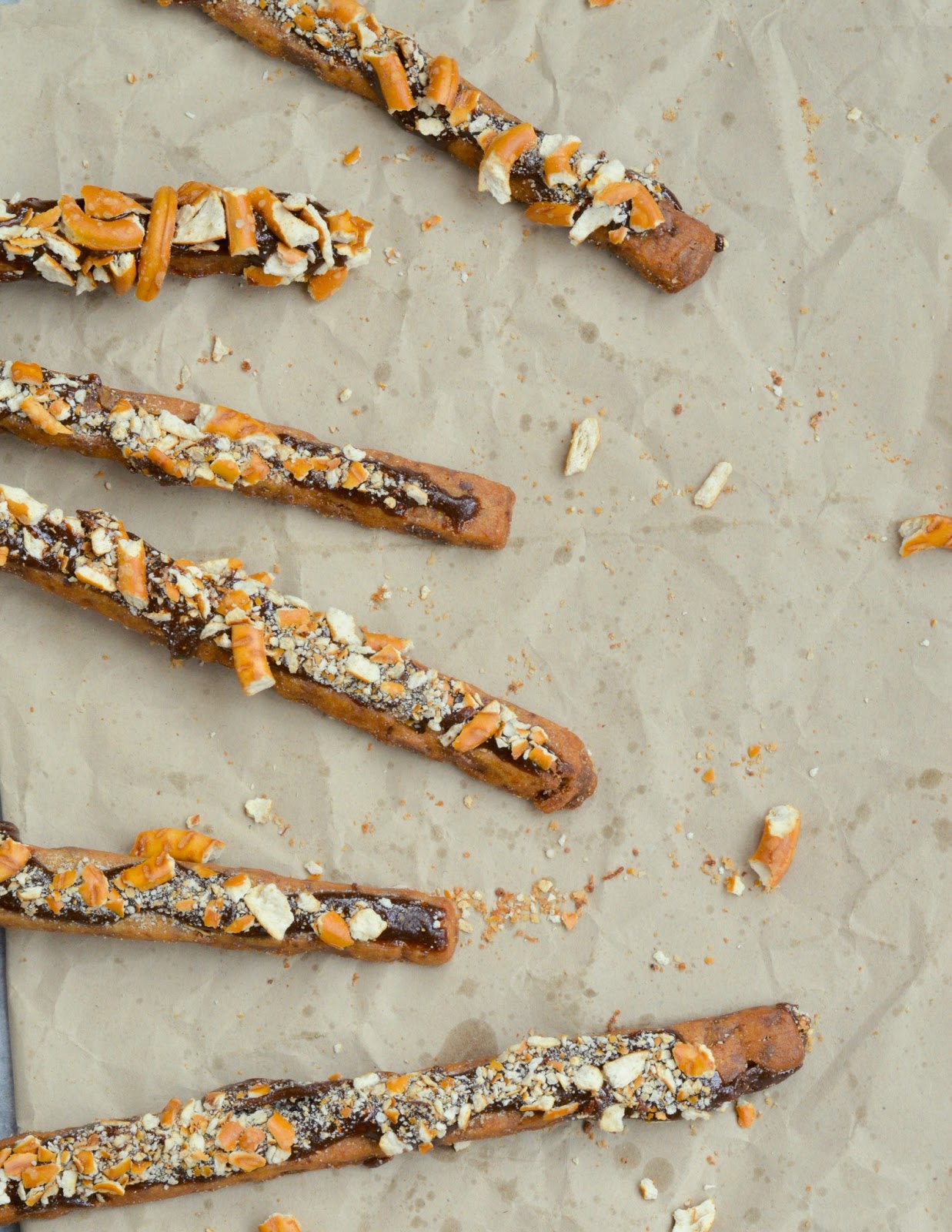 Let me explain. The temperature throughout the past week has varied by 10 Degrees Celsius, so right now we are either comfortably cool or frying in the weather. We reach 50 degrees in some town in the west and inner Australia, even a special news report was feature on television about it.

Of course I felt like playing around in the kitchen, and you would think I would be smart and whip up some ice cream or granita. Instead, I switch on the oven, and play around on the stove with molten toffee. The timing could not be worse, the oven set to 180c, molten toffee at hard set stage on a flame in a tiny kitchen will no Air condition and no windows open; I was recreating the canter of the earth in my kitchen.

Yes, on hindsight I see that I was making the 35 degree weather worse for myself but when I want to make something; I will make it regardless. Anyway it was worth it for the result which sweet version of a grissini. 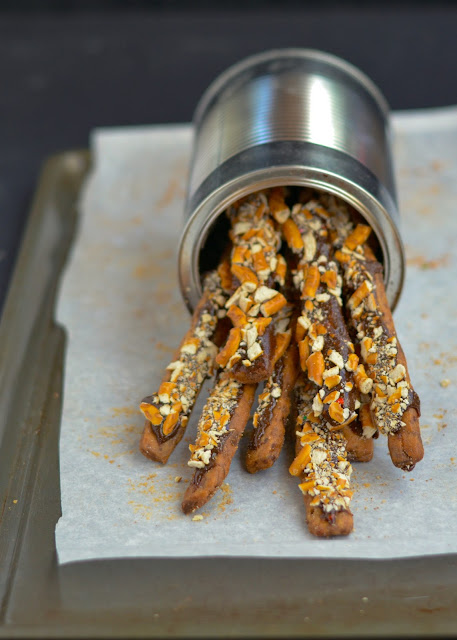 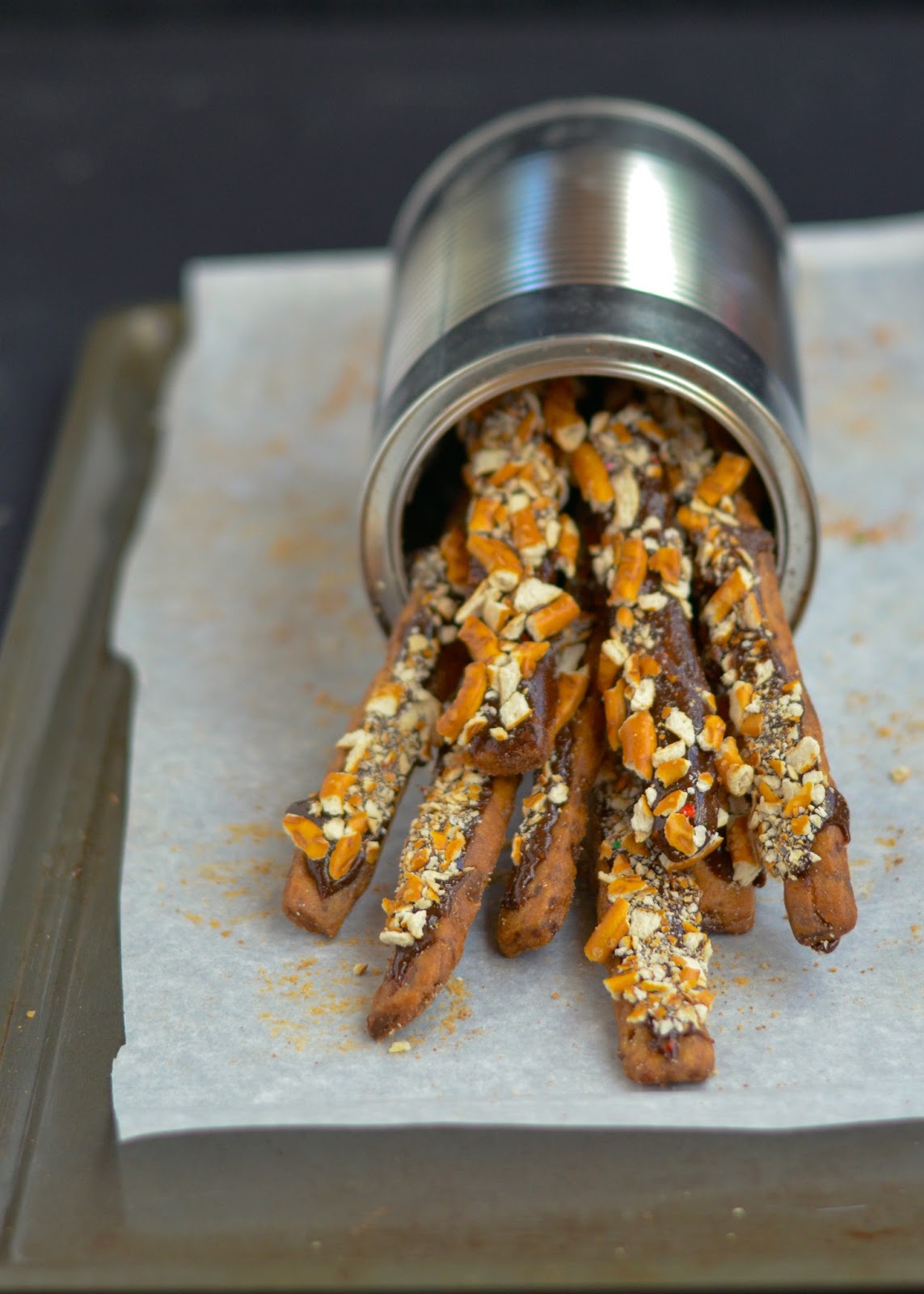 Crisp Chocolate chip cookie sticks covered in a thin layer of bittersweet chocolate toffee then sprinkled with crushed pretzels and sea salt. So very moreish with the combination of sweet and salty, this is off set by a note of bitterness from the toffee in the background. These are great for hot or cold temperatures. They can be used as spoon for ice cream or a dipper for hot chocolate, because the toffee coating protects it from being too wet after adding liquid.
I recommend trying it on a day which is not predicted to reach 40 degrees, or at least have some good air conditioning. 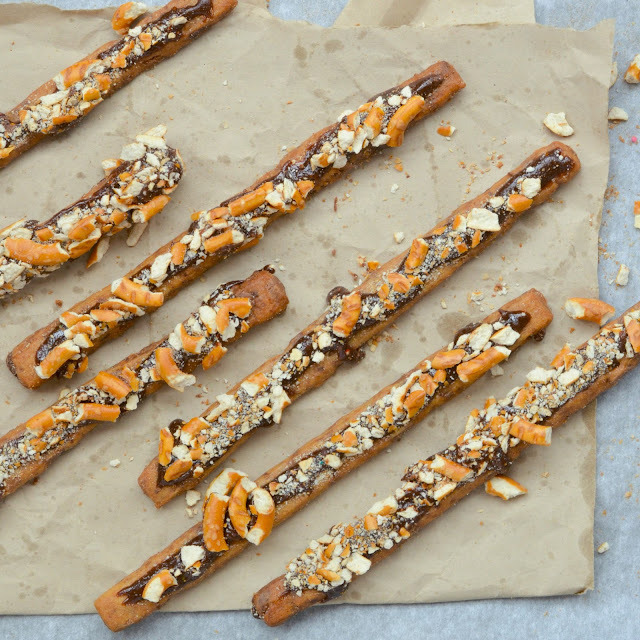 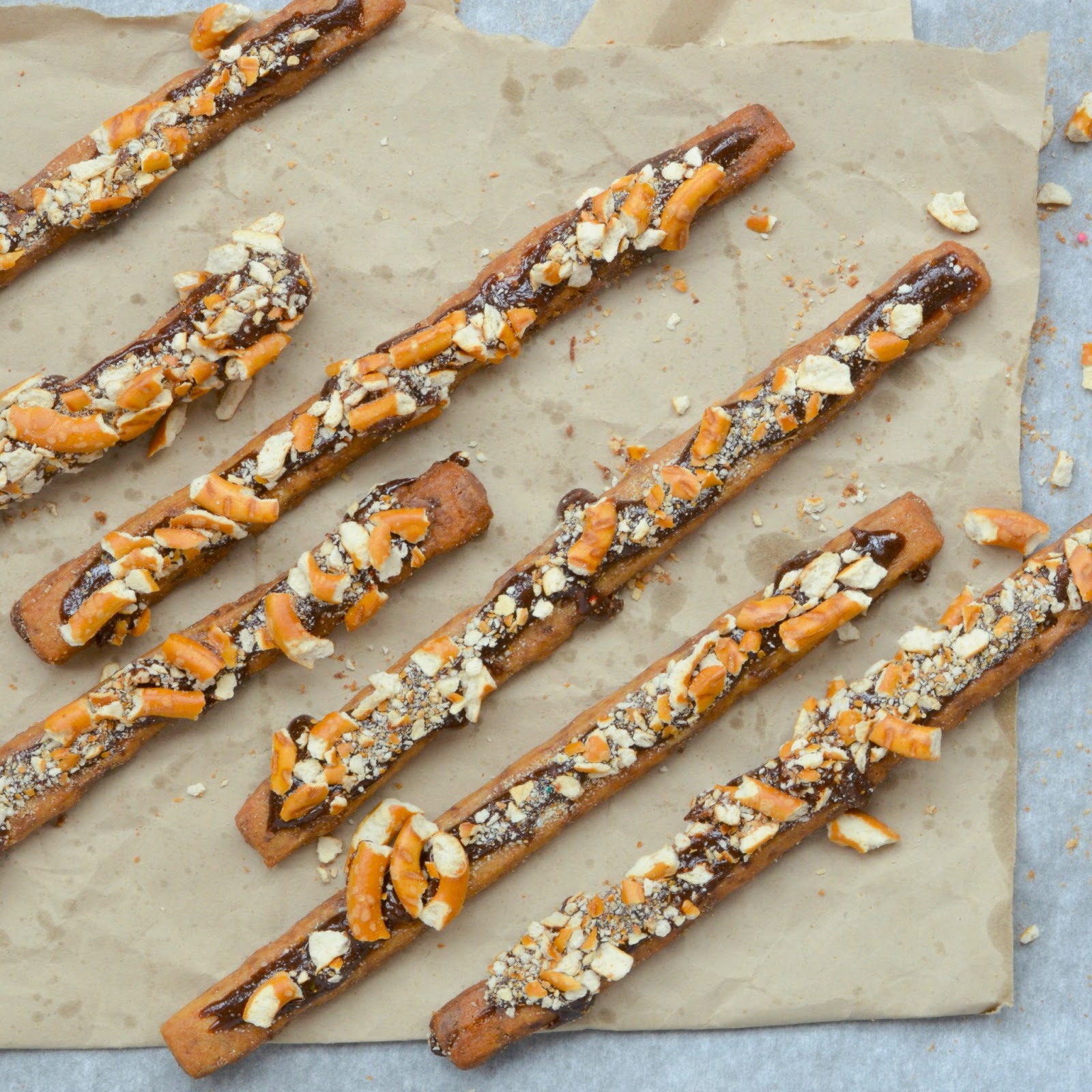 Cream butter and two sugar in a stand mixer for 5 minutes. You should get a light fluffy mixture.

Add the flour and baking powder in heaped tablespoons on a medium speed until it clumps around the paddle beater.

Roll into two flat discs and cover with cling wrap. Fridge for 1 hour at least or overnight for a crisper texture.

Between two pieces of baking paper, roll until 4 mm thick. Cut the dough into 22cm by 1 cm rods. Transfer carefully to the baking trays and fridge for one hour. NOTE: if it breaks, don’t worry, just pinch it back together again. Place the cookie rods at least 2cm away from each other.

Pre heat oven to 185c. Bake one tray for 10-15 minutes. Cool on the trays then transfer to a wire rack

Heat glucose in a medium pot until warm enough to cover the base. Keep the temperature medium low.

Add sugar and stir them together with a heatproof spatula until you get the syrup to a deep gold colour. It should remind you of toffee and smell like treacle.

Remove from heat, then add the crush M&M’s

Stir until they melt into the syrup.

Once the syrup is made you need to work quite fast. Wear cloth gloves and plastic gloves to prevent burns.

Using a small spatula spread the toffee on two rods Around 3mm thick, then carefully roll them in the pretzel tray then move to the empty baking trays

NOTE: If toffee is setting too much, re heat for 10 seconds on the stove. 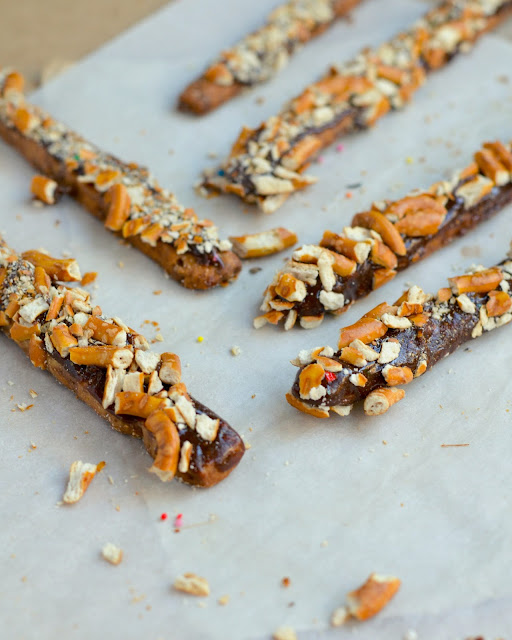 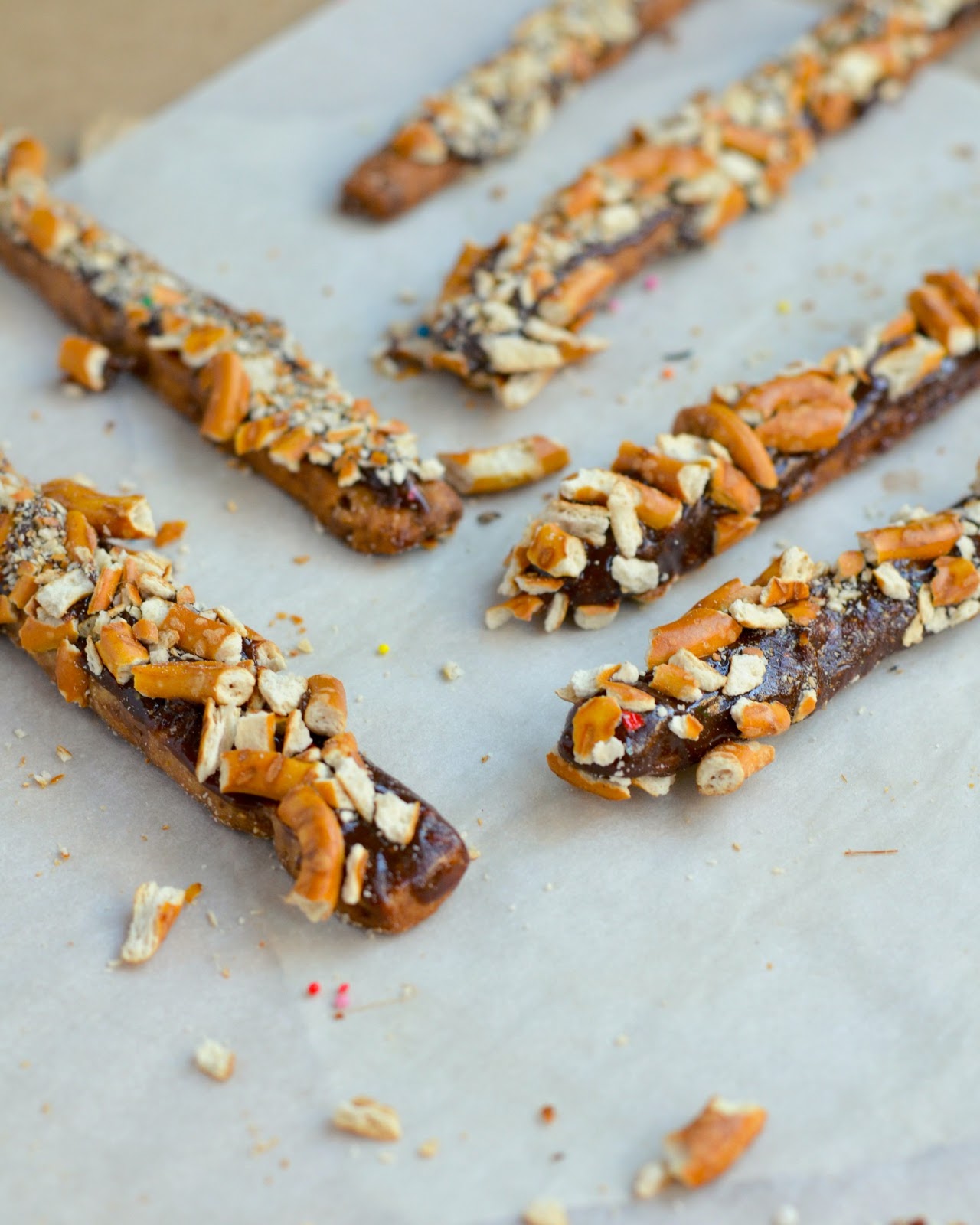