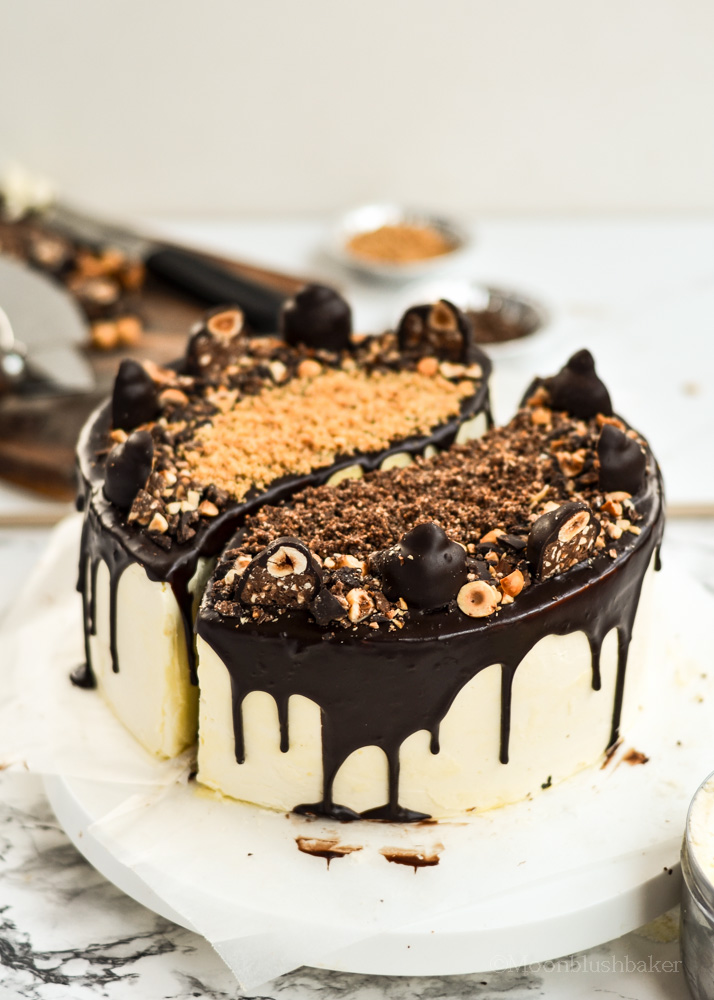 It is probably not surprising that I have fallen behind on post lately. A combination of the winter chillis, my lack lustre imagination and having the time to procrastinate (because, hey, it is mid term time in Australia). Thankfully the winds have picked up again (figuratively and literally) which has pushed me back in to “Go,Go” mode. After making a few party cakes (which I have yet to post here but I will!), I was burnt out and that is not just the smell of the toast burning. As a baker, or at least a home cook,  your favourite food to cook is never the same. 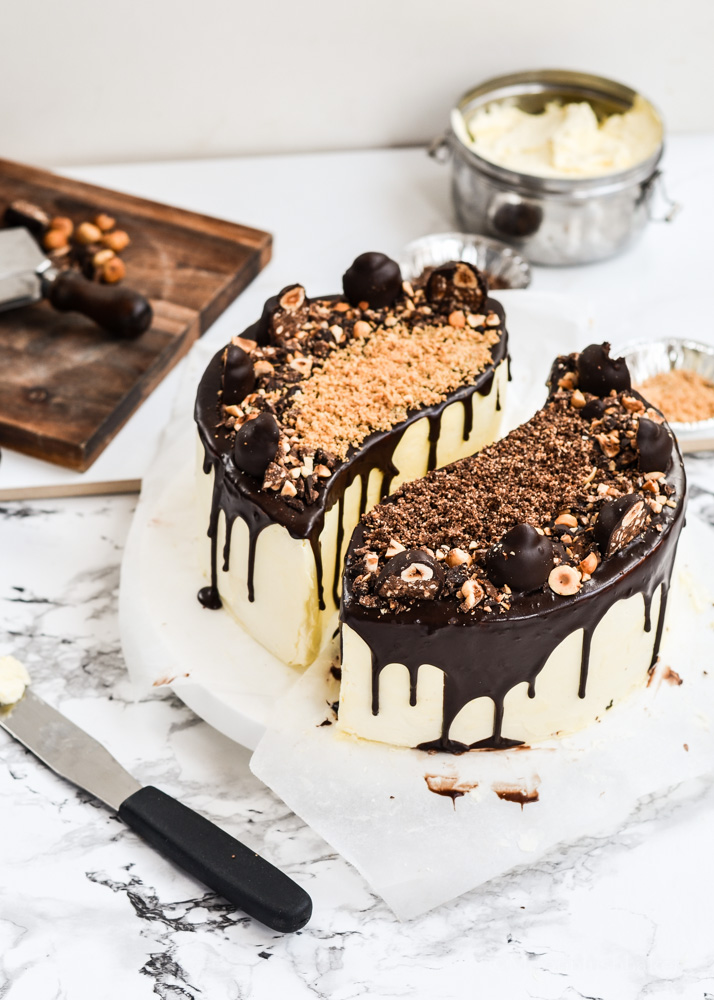 Sometimes I may love the end result of fancy pants cake, torte or dessert. Who can fight the super sweet cuteness of this Sprinkled oreo ice cream cone cake or Cinnamon roll cake? However the trade of is I will hate every single moment in assembling that S.O.B of a cake. Not only does this make me fear designing another dessert again (impossible but close to) but it makes me less likely to want to eat the cake. Maybe it is about cutting into something you put so much work into, only to see it gone within 2 hours after cutting it at the party. 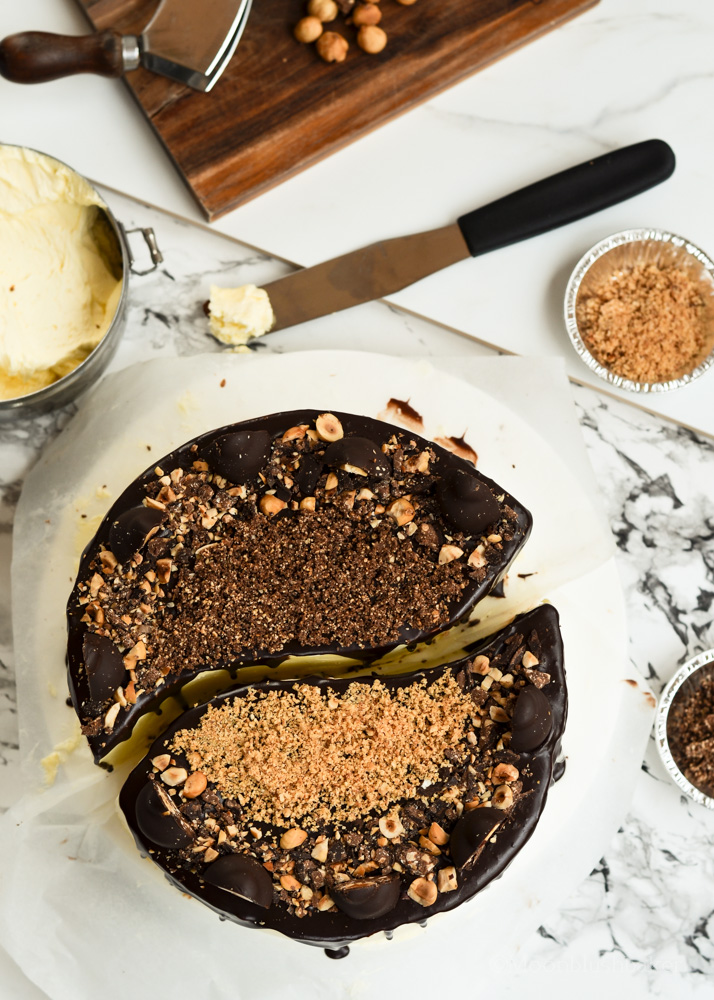 Food needs to be enjoyable to the person. It is not just about the result at the end but the process is just as important. Also we cannot ignore the factor of cravings that fit in to this Triangle of cook’s enjoyment.  So a majority of my time in the kitchen is actually spent on cooking things that contain less than 6 ingredients. 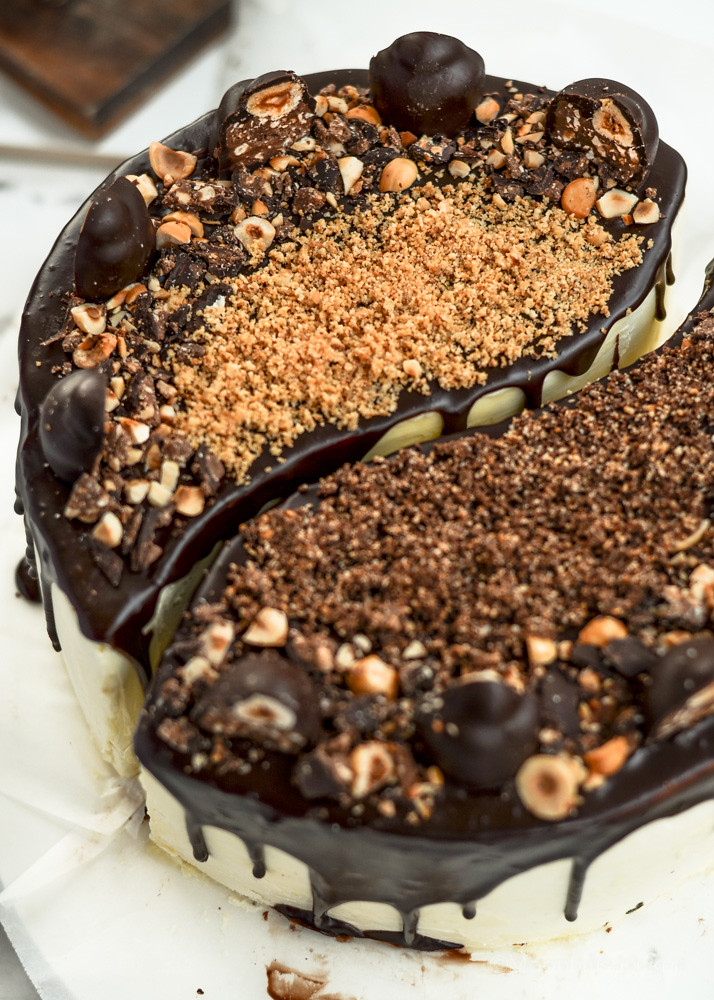 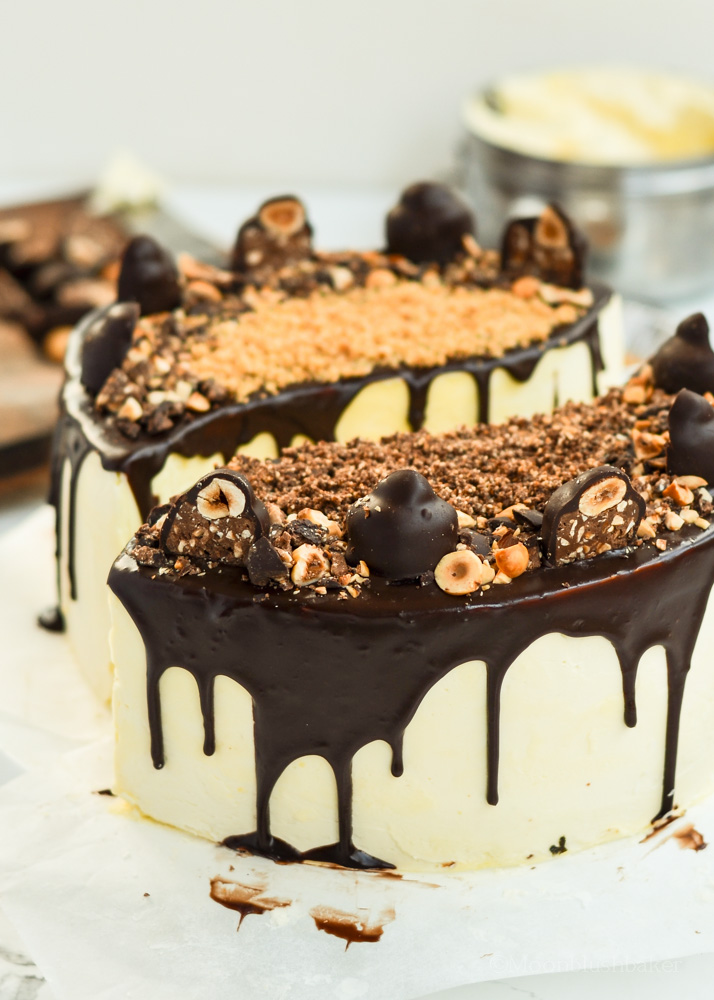 Many of them do not make it here to the blog because it is for MY enjoyment.  For example, in order to get over my “burnt out” stage I was FINALLY able to try out a recipe for roasted apple and banana yeast bread and perfect numerous other kitchen basic skills (mayo by hard, deep frying on a small scale and cooking the perfect poached egg etc.) 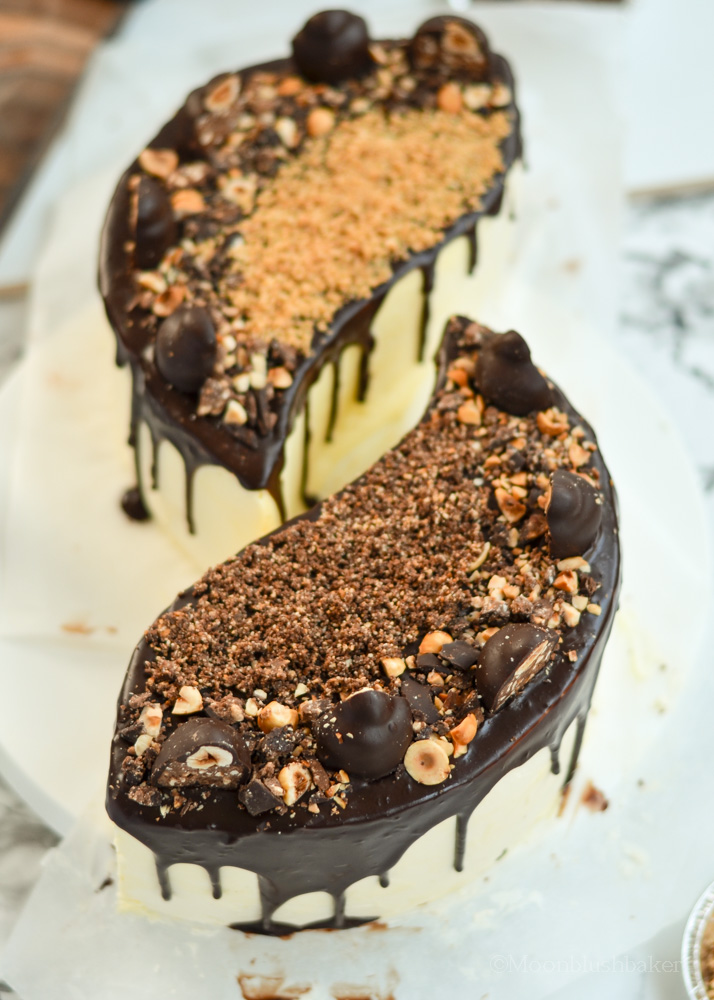 While my blog does tell you how to make cakes in my life and what not. I am not here to tell you what you should do in the kitchen (who likes to be boss around?). My main aim is to give you sparks of inspiration which you can make your own. This way not only can you be proud that you have created something that you like but you have also done it YOUR way which according to Burger king is the best way.  Plus, sharing is caring in my books and I have no time for people who tell me secrets is what makes life interesting. 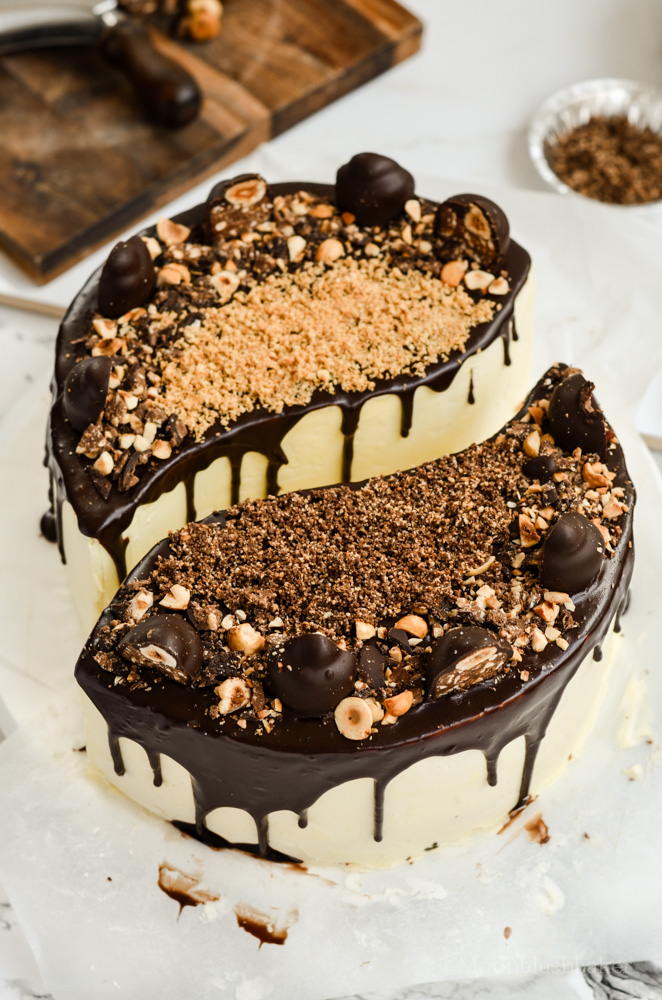 So admits of all this talk about keeping things simple and enjoyable in the kitchen. At the time, this was my idea of enjoyable project (crazy, I know). Inspired but the Ying and yang symbol and my recent success in making shaped cakes; I embarked on another cake that involved template cutting. The brief was simple a birthday cake for a girl which had to focus on the little chocolate Baci (That hazelnut mousse chocolate with the weird bump in the middle) 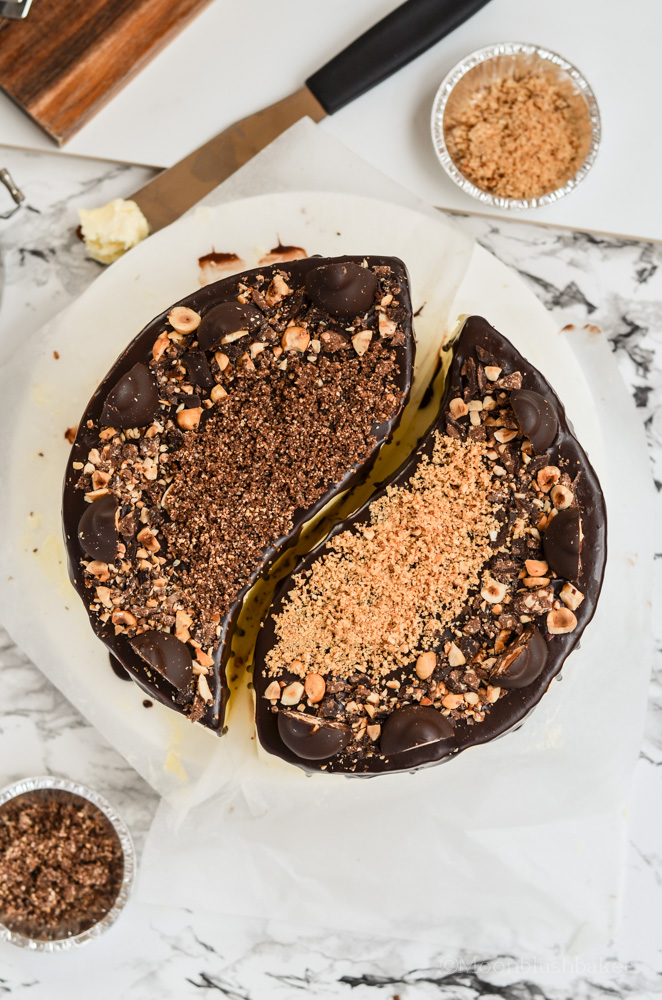 With that in mind, we have my Heaven and Hell Baci cake! Two layers of chocolate chip hazelnut meal torte sandwiched with thick layers of luscious nutella and choc chip butter cream, finished with a coat of whipped white chocolate ganache and a dark chocolate glaze topping.  The torte remains moist due to the high amount of nut meal which means it can be prepared a good 2 days in advance without dry out. Also the torte is able to hold the vast amount of nutella and buttercream. We all know that is nothing without a thick, ass layer of frosting. 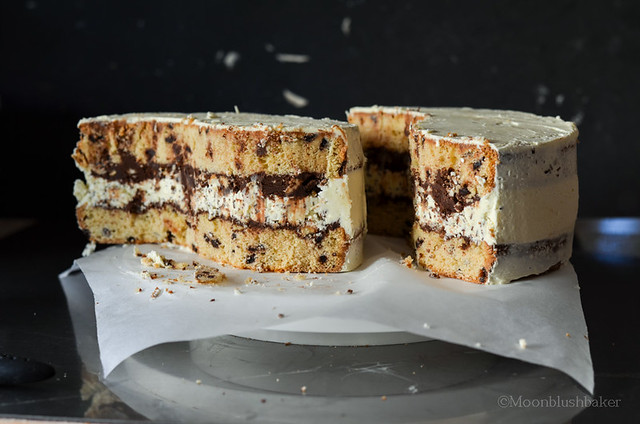 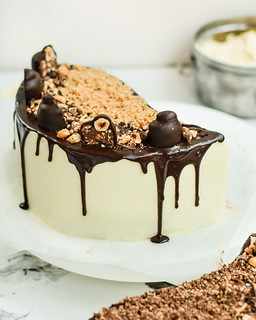 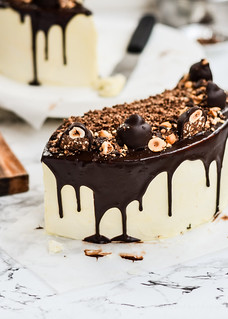 To decorate you can do a ying yang symbol, with Baci and crumble, however I made mine like this. I left a gap around the edge to decorate with the halved, chopped nuts and chocolate.  The Baci crumble is very simple and is effective in highlighting the contrast between the two cakes.  The glaze is another great technique to make the cake standout and who can resist the dipping chocolate? 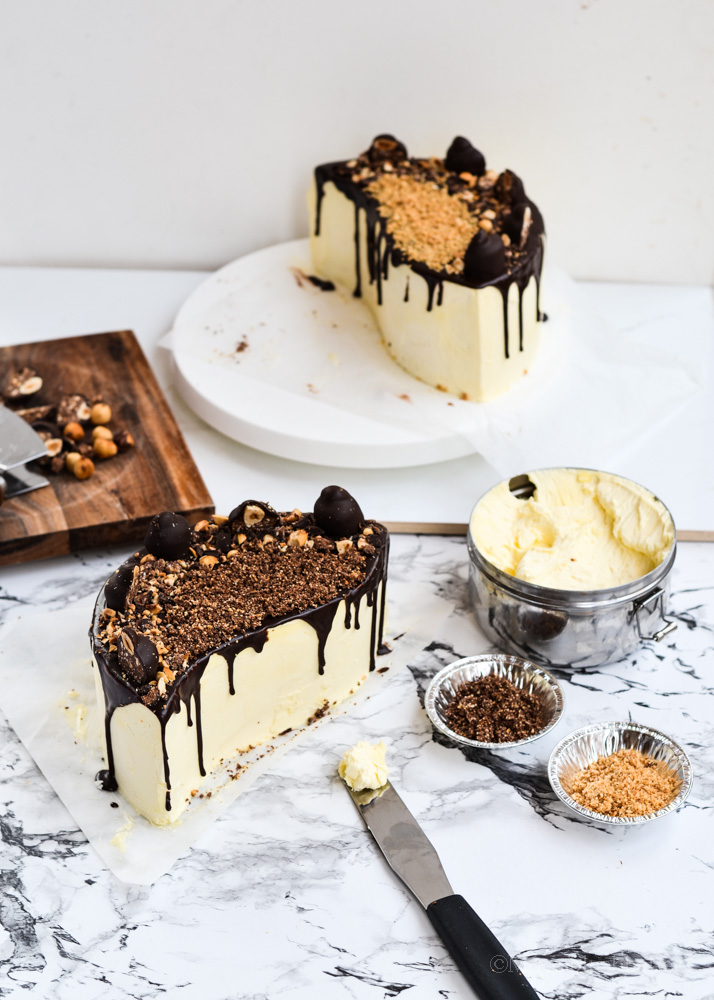 Yep I went all out for this cake.  Seriously this not for the faint hearted and as it makes quite a big cake, it would feed 25 people easy. It is way too good not to go for a second helping; so I made sure you can have another cheeky piece of midnight cake. 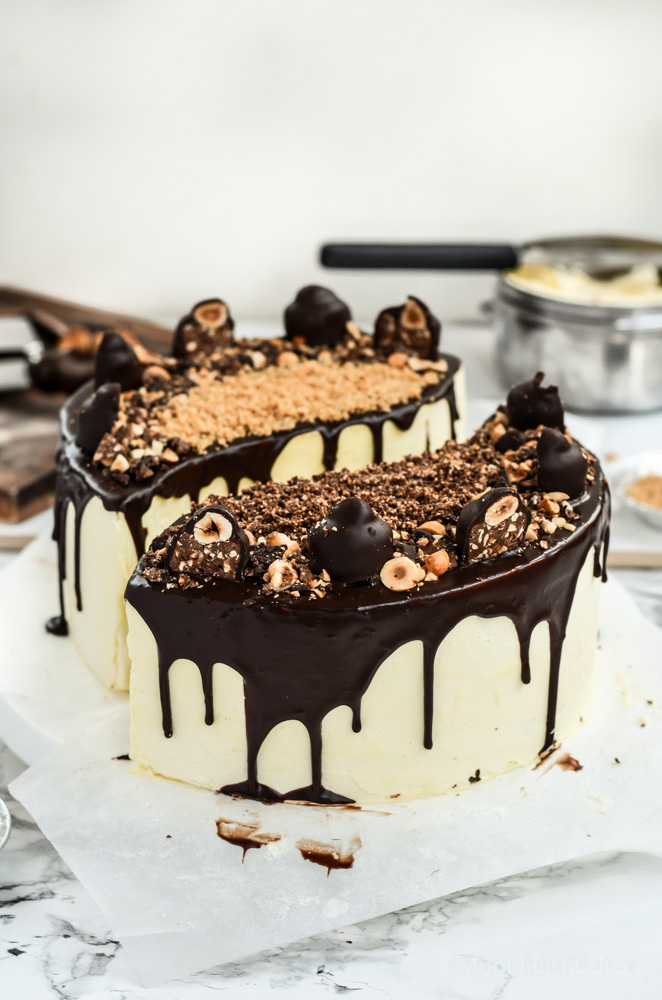 Chocolate glaze (This is the full amount if you can not get nutella;half it if you are using nutella in the middle)
450g dark chocolate, chopped
200mlpouring (single) cream
20g butter, softened


HAZELNUT TORTE
Pre heat oven to 180C. Butter and flour 2x24cm high, spring form pans.
Mix flour, hazelnuts, baking powder, salt and mix in a large bowl. In a stand mixer beat butter and sugar for 5 minutes until light and fluffy. Scrap down the bowl whenever necessary.
Add eggs, oil and vanilla bean while mixing on a low speed until combined (about 2 minutes)
Fold in flour mix to the butter mix in 3 additions, alternating with milk each time until well combined.
Fold in the choc chips.
Pour into prepared pans and smooth out the tops of the cake. Bake for 40-50 mintues  or until it is golden brown and a wooden skewer pulls out clean.
Cool in pan for 10 minutes then turn out on a wire cooling rack. Set aside until room temp.

CHOC CHIP BUTTER CREAM CREAM
In medium bowl whisk together your egg whites and caster sugar.
Place bowl over a saucepan of simmer water. Whisk continuously until the sugar is fully dissolved. Rub a bit of mix between your fingers to test.
Transfer mix to a stand mixer with the whisk attachment. Beat until it becomes a big fluffy and white. At this point it should take about 8 minutes for the meringue to come to room temperature.

Change to paddle mix. While beating the mix on medium with the paddle add the butter a cube at a time until it fully combined. GO slowly here and scrape down the bowl frequently. Once butter is all added, beat on medium high till it is fluffy and pale.
Add vanilla and salt beat again. Fold in choc chips.
Set aside for later use

WHITE CHOCOLATE, HAZELNUT GANACHE
Over a pot of boiling water, place white chocolate and cream in a steel bowl. Stir with a spatula, slowly in a figure 8 until cream and white chocolate are melted together.  Add oil and butter and combined.
Transfer to fridge for 1 hour-2 hours to harden.
Using a stand mixer whip the ganache until whipped and light. Only for about 2 minutes here.

GANACHE/ GLAZE
To make the chocolate glaze, combine the chocolate and cream in a saucepan over low heat and stir until smooth. Divide mix into two bowls, one third of the mixture in one and two third of the mixture in another. The larger mix will be for the frosting and smaller bowl for the glaze. Set the small bowl aside to cool to room temp.
With the larger bowl place in the fridge for 30 minutes, stir it and return to the fridge again for 30 minutes. Continue to do this until you slowly get a thick mixture.

CRUMBLE
Process roasted hazelnuts, biscuits and baci chocolates in a processor for 20 seconds. You want a rough crumble.
Dive this mixture into two bowls.
Combined cocoa powder into one of those bowl to “dye” the crumble dark brown. Set both aside until needed.

Level off each of the tortes.

After Spread a generous coat of nutella on one side of both cakes.

Place one cake, nutella side up on a turn table. Pipe choc chip butter cream in a thick layer, about 1.5cm. Place the other cake layer on top, with the nutella side facing down wards.

Using a paper template, cut around the template with sharp knife from large round cake. This way your cakes will join perfectly with each other. Crumb frost the cakes with a small amount of butter cream. Allow to set in the fridge for 30 minutes.

Spread of ganache on to the cakes. Allow to set in the fridge for 30 minutes.

Re warm the glaze in a Bain Marie. Allow the glaze to stand for 5 minutes before spreading over the top of the cakes.

Line the edge with chopped hazelnuts, chocolate and baci chocolates. Fridge for 1 hour before serving.

'Level of Enjoyment /-/ Heaven and Hell Baci cake' have 10 comments